I then started considering the sounds of these objects, they could be possible musical material and perhaps work as fundamental themes. The sounds could be transformed and connect to the breakdown of the language in the text. 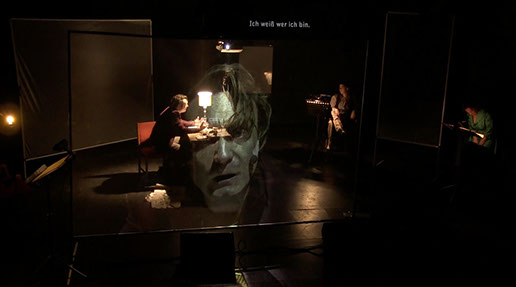 With this followed the idea to also let the text sequence return many times, each time with different changes. I suggested the idea to Dahlqvist who used it as dramaturgical structure for the text: The explanation on how language works comes back over and over, but for each time new insights and perspectives appear which finally leads to the conclusion that language cannot only be explained and understood through language itself.

The idea of using a musical variation became a decisive form structure for the continuing work on the performance: the dramatic text and the music, the electroacoustic material as well as the singer’s part, and the overall dramaturgy. It became the backbone for developing the scene structure that I will describe below.

EXAMPLE 5.3.2. Video: Variation form in A Language at War

During the work process I have kept a diary. It stretches from the very first idea to some months after the premiere I have also recorded some conversation between Jörgen and myself when we have been discussing about the work and the creative processes. In the texts from the diary I have noted who said and wrote what parts in order to bring forth the trajectory of the on-going dialogue on ideas and reflections.

Jörgen sends me an e-mail:

Here some inspiration for Wittgenstein and a cool title. A Language At War.

I really think this could work with that kind of vocal techniques you played for me. There is a connection somehow. Quotes from Wittgenstein that could be used in the background or as a part of the process:

My work consists of two parts: of the one which is here, and of everything which I have not written. And precisely this second part is the important one.

My propositions are elucidatory in this way: he who understands me finally recognizes them as senseless, when he has climbed out through them, on them, over them. (He must so to speak throw away the ladder, after he has climbed up on it.) (6.54)

Whereof one cannot speak, thereof one must be silent.

“For this is what can be said, this silence. ”

(Comment: this part is the same in the final version, part XII)

The words about silence in the beginning, should it be silent…or more a sounding silence…

I imagine some vocal sounds, soft but harsh sounds, repeated. Discuss the idea of having the actor goes more and more towards the singers sound, as a long overall process.

Jörgen says that the extended voice sounds represent the chaos of life, reality, opposite of the logic.