Initially Dahlqvist just made a short text draft of one or two pages, largely based on Wittgenstein quotations. With this text as a starting point we made a couple of improvisations with Wingerath and the actor Rafael Pettersson.

I spent a few days more with Wingerath, recording improvisations with her, explori her extended vocal techniques. With the first few text drafts both of us suggested ideas, strategies and directions for a number of vocal improvisations she did. The idea with the words for different objects, as discussed above, was one thing we worked on, experimenting by performing them with different vocal techniques as well as developing a list with more words also in other languages, as German and English.

Here the words were used as musical material, as sonic entities, in the process largely detached from their semantics.  The improvisations were recorded, which meant that we could use them as a bank of ideas for the compositional processes. Some of these vocal recordings were also used for the electroacoustic music parts.

During the period of these recordings we had a number of ideas for what the performance could be, but there were no overarching dramaturgical concepts. Hence, I found it difficult to start writing music as I had intended, despite the very rich vocal material Wingerath had presented me. Instead the working process took another turn towards a much more collaborative direction. Through common workshops we tested ideas, played with the text drafts Dahlqvist presented, improvised and worked out the dramaturgical strategies collaboratively. I recorded these sessions in order to continue working out the musical material more in detail between our meetings.

In this process I started writing performance instructions for Wingerath directly into the script instead of doing a detailed music score, a similar approach to what I had done for my own performance in Hamlet II: Exit Ghost. The instructions referred back to the recording sessions we had done. Building her parts on the improvisations she had done earlier, made it possible for her to perform much freer and still have a rather fixed musical composition. It would of course have been possible, however complicated, to notate such extended vocal performance as Wingerath did but it would likely have demanded a large focus on reading the score in performance, which eventually could have resulted in a sense of detachment. Now instead her part was totally linked to the interplay with the other performers on stage.

Transcription from a recorded conversation between Jörgen Dahlqvist and myself 11 June 2011:

Kent: The question is how we should do this… also in action… in what way we can include, trash language, in relation to actions, to what, to ideas about language, to the understanding, into that which you cannot speak about.

Jörgen: Exactly. Simply, you break down speech into singing.

K: Yes, to singing, or into a nothing. …or if…. you can find something that feels good….the points that make the actor and the singer to be at the same plane.

J: What I find interesting is what the singer can do, how it works. That’ll be interesting with the first recording. Where are the connections? It is there somewhere but it is difficult to imagine her spectra…

K: When you talk the same language you can always take hold of the words, like we did in The Harsh Notes where we found a natural bridge where the singers spoke, they caught words, the functioned as echoes, someone goes in front.

But if you break it down in such a way that it only becomes sound, without pitch…like Rafael has done before….

J: It strikes me that you could use live-electronics, to break down, trash, that you glide in and out of some live-processing….

J: So that you find where that mix is.

J: You go with the actor, break it down further. You will have a musicalization! I thought of that in the beginning of Hamlet, where you did put on those effects, turned it into a musicalization of language.

K: The question is if we should text, where we break down something in several languages, to take some bit for example where there is text about “silence”. Or if we make a quick variant where we play with that word in different languages ….

If you play with a word like that, then we could, maybe even … begin almost to sound like a Dadaistic ….

J: Yes, Parole Liberta, The Game of language. You make the language into something graphic but here we’ll make into some kind of form of everything, take the sounding, the vocal aspects of language and use that.

K: yes I should perhaps try out some material …

J: It strikes me, we talked a bit about it: who is it that drive the narrative?

J: It strikes me, if we should develop it, like in Hamlet, that we had after “I will blow up the world”-section, where it enters into something musical., Rafael switch of everything, as a conductor, that we do exactly those things, but we find (snaps his fingers and indicate a trigger-point) … now it enters … like in Indy (mimics scratch-sounds form Indy 500), where those things could be as Angela, that what builds … then we’ll have the shaping of the form in that we keep a focus on that, that is something we take with when we’ll talk about other things later on, when we look back. We have ended up here without thinking of it. 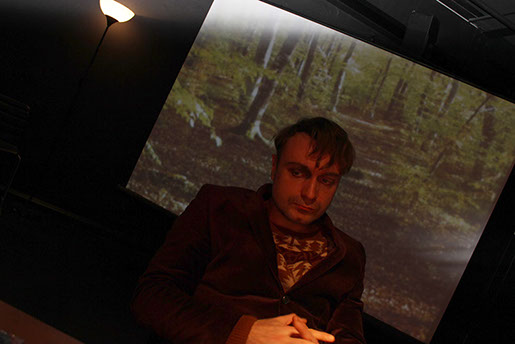 Because this is what can be said. This silence.

Or this is what can be said this silence.

What I can say. This silence.

Because I believe in the perfect. Otherwise nothing.

Otherwise nothing. Except silence.

Therefore I say nothing about that that cannot be said anything about, that is here inside outside of language that is simply silence, but not in here.

The logical law as opposed to the psychological law

The logical, the logic, seems to me therefore eternal and independent of the empirical knowledge. The empirical knowledge, living itself, what I have in here, that that is silence, but only apparent silence. This I know from experience, that I have lived, as we learn from experience. Life. Life. Life turmoil wind outside the window, the wind, the struggle. It is not the truth itself. The truth itself is beyond this, regardless of life itself, or life itself or the lived experience of this silence that I have within me, that is only apparent, that can not be said and therefore is silence, is beyond this, as a perfect rounded gem.

Diary from the work on A Language at War II

Jörgen presents ideas about how we can use video, projection screens and how this can be an important part of the scenography.

Similar projections of sound! Of the voices. … idea about many small speakers… The voices get detached from their actual physical locations…

Jörgen says: …create a situation that is here and now, …no future or past. In music you do not know what will come, but it seems like you do…

Music and situation is here and now!

(Comment: It’s interesting to note that Jörgen makes a drawing of how the stage could be set, with video screens and furniture, this early in the process. The sketch was very close to the final stage design. The image of the performance space is there before any text was written or any music was composed, thus this visionary image certainly had an important impact on the whole work process. The stage was not created for a full written play with music already composed. On the contrary, it was outlined in the very beginning when the first fragments of text were written and the first ideas of music were sketched.) 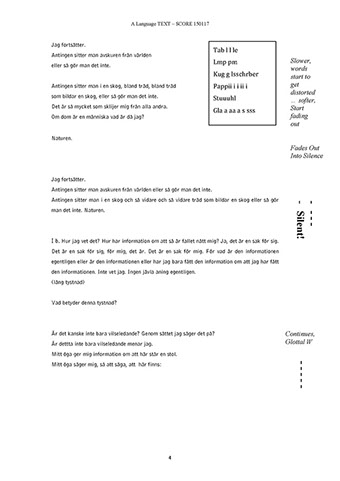