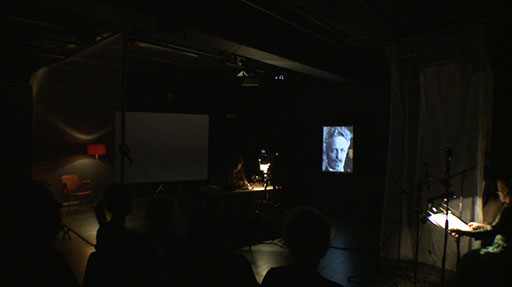 Jörgen sends the second version of the text. Seven parts, quite short, almost like seven poems. No fixed dramatic structure. Most of these texts are part of the final text.

Visit Copenhagen, Athelas Festival with Heiner Goebbels as portrayed artist. Performance of his Songs of Wars I have seen for two ensembles with words by Gertrud Stein and a lecture with presentation of the work Schwartz auf Weiss.

(In December the year before I saw Eraritjaritjaka in Copenhagen, a music theatre piece for actor and string quartet with words by Elias Canetti.)

Recording the second version of the text with Rafael Pettersson, the male actor, reading. First just a neutral reading, then variations with different expressions.

Perhaps even objects in the room can be used in the drama, that could function as percussion, sound-sources.

Work with Angela Wingerath, the soprano. Improvisations, tests with the text parts from Jörgen, reading and performing together with Rafael, investigating the different extended vocal techniques. Everything is recorded.

Instead as Goebbels… epic text, for example Canetti and put situation to it, make it appear as dramatic text

Music and picture clarifies the epic

Through recording we see the situations as sounds, as epic

Raf and Angela felt directly that there was a situation from the first recording, Angela said: must know the situation to be able to sing.

Use Post-It Notes for the process!

In some sections also the actor, Rafael Pettersson, experimented with his voice, letting it drift away from the semantics, extending it into sonic territories. Here the voices of the singer and the actor meet at a point that is neither speech nor song.

The dramaturgical work on direction, acting and musical performance was largely a collaborative effort between Dahlqvist, the performers and me. The process reminded me a lot of the one with Hamlet II: Exit Ghost, a similar kind of action analysis was used. The ‘play under the play’ in this performance was that the male actor is giving a philosophical lecture. He has been hiding for many years to find out the secrets on how language works and now he will present his findings to the world. He begins to speak confidently but very soon he began to doubt and hesitate on his sayings.

The Super-Ego – The memory – a memory that emerges, but that we never really understand what has happened

The sub-conscious – Angela, words that cannot be understood, other languages

Kent: it is striking how much alike the texts and productions by Jörgen are in form structure when compared to my compositions.

The texts by Jörgen are largely written as a kind of variation form, it’s as if he only has a couple of sentences that are varied and developed! … Austere forms, strictly structured.

Conversation and reflections with Jörgen 2 July

Interesting at the recording with both Rafael and Angela, I gave them quick instructions on how they should read the text (it wasn’t Jörgen how directed them!). The direction can be seen as both dramaturgical and musical – shows the common structures.

We have talked and reflected on the form structure in the works, especially hamlet. It seems more and more clear that there are much in common concerning form structures. How the trajectory forward, for the actors or the music, the energy forward, can be seen as the same thing. Easy to use musical descriptions on what is going on in each scene.

Each part does always have a specific function in the whole! The combinations of the parts, in which order, of outmost importance. One can check how the scenes in Hamlet were in the beginning. During the work, when the trajectory of the scenes and their meaning became clear, we could also move around the scenes. This seems to appear when the situations are laid out, then the function of the scenes are revealed – not only in the “normal” course of events, but also in how the combinations affects all parts, making them the most interesting! 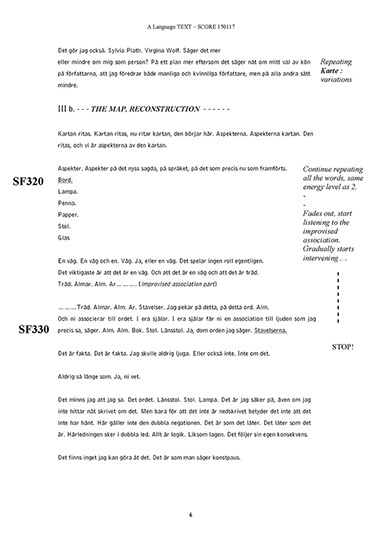 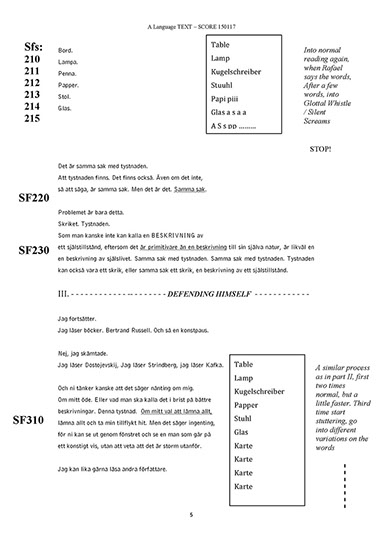