A Language at War forms one long continuous dramatic trajectory, but just as with Hamlet II: Exit Ghost we divided the text into shorter sections with a start, a dramatic development, turning point and closure for our dramaturgical work. Each scene was labelled with a distinct header.

I. STARTING THE PRESENTATION. (Rafael – solo)

II. A. SHAPE UP! (Rafael. Angela enters: start translating the words, repeating them, after third time the words get distorted.) - B. QUESTIONING HIMSELF

III. A. DEFENDING HIMSELF. (Rafael. Angel continues repeating the words)

B. THE MAP, RECONSTRUCTION

V. A. SPEECH OF DEFENCE. (Rafael. Angela again: The words are red pre-recorded, Angela breaks down the words) - B. DOUBTS - C. NATURE IS UTOPIA

VI.  A. UNTITLED, A MONOLOG OF THE INNER (Linda solo)

B. TRYING TO SAVE THE SITUATION. (Rafael, Linda, Angela) 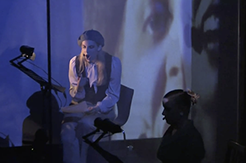 EXAMPLE 5.3.12. Video: Examples of video projections in A Language at War

The fundamental sound material for the electroacoustic music part was built on sound samples of the kind of objects that are repeatedly mentioned in the dramatic text: ‘table, lamp, pen, paper, chair, glass’. These sound materials appear first directly connected to the text of the male actor. Gradually they become independent musical materials that develop in their own directions. Once they had been introduced they return in different sections transformed, referring back to itself, without connecting further to the text, narratives or any other elements. Through this kind of musical transformations and development a material takes on new meanings through the self-referential structure it builds and through the different contexts it reappears in