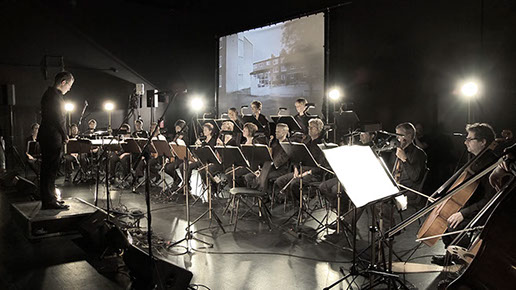 If “Arrival Cities: Malmö” was set in the verge, at the border and the passport control, in a limbo in a lawless no-man’s-land, one can say that in Växjö, there is the attempt to come through, become a part, to get a place in this new land. Can’t I just stand here in the shadow and be silent, something like that was the last line in Malmö and Växjö starts with a woman that don’t want to die, that has a body and a voice, that wants to be included, that has rights, or? On a big screen the woman’s escape is projected, houses on a row, the road outside the bus window. Pre-recorded voices say yet you have adapt to where you come, they say yet etc. etc. The music points to Stravinsky’s “The Rite of Spring” but feels also very cinematic, I associate to Bernard Herrman’s music for Hitchcock’s “Psycho” where also a woman is sacrificed.

So does this this vicious tale about the body, the voice, the rights by the actors’ voices, the music and the song take shape into a powerful theatre concert.