The dramaturgical functions of the music: ten modes

1. Independent musical works/sections without texts as part of the large form structure

In the works presented in this thesis it is only Arrival Cities: Växjö that has a more extended section of instrumental music and that is the string orchestra piece that opens the second part of the work. It gradually emerges out of a radio play section. When the actors enter again the string orchestra music continues in the same manner and with the same expression, but with the strong interplay between the actors and the strings the music now takes on a new function that can be described as a kind of co-actor.

2. Music as an independent layer against other elements

A clear example is the electroacoustic music in A Language of War. The sound materials, based on the objects that are presented in text, take on their own direction and development, rather independent from the other that is happening on stage. To have a music that is perceived as an independent layer requires that there are other elements that are distinct and have their own strong directions and trajectories as well. In A Language of War there are several sections where the man is talking at the same time as the singer and the electroacoustic music form independent musical layers, together forming a polyphonic structure.

EXAMPLE 6.2.2. Sound: from A Language at War (from five different sections)

The extended vocal techniques utilized by singer and voice artist Angela Wingerath in A Language at War is example of where the voice and words are often sonic, non-semantic material.

EXAMPLE 6.2.3a. Sound: from A Language at War (from three different sections)

Parallel sections are found in Fält where a similar approach to the use of the voice is found, performed by Zofia Åsenlöf. In the works presented here this approach is often a result of the text being written in such a way that the semantics of the words dissolve.

EXAMPLE 6.2.3b. Sound: from Fält (from three different sections)

When performed the words turn into sonic textures. As discussed in Chapter 5.2, this is a recurring transformation in in Hamlet II: Exit Ghost, where the voice and dialogues of the actors becomes sonic, musical textures together with the electronic music. 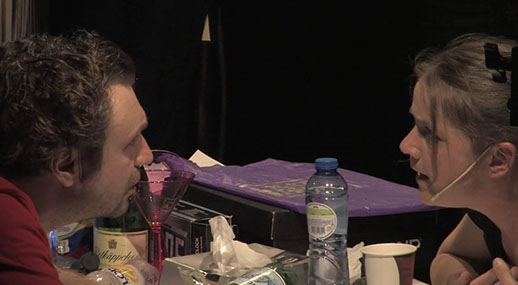