The transformational processes in Hamlet II: Exit Ghost have central dramaturgical functions where the semantics of the dialogues dissolves into sonic textures while retaining the scenic situation. The use of electronic music and sound processing techniques were the means for these transformations to happen. A further example of such sonic transformation is the scene where Hamlet asks Ofelia  if she has been down by the water and she says: ‘no, it’s raining’, the electronic music transforms into the sound of raindrops. The sound transformation then continues and the raindrops turn into electronic clicks.

Another example with a different musical and dramaturgical function is the transition between the pre-recorded radio play and the string orchestra piece in Arrival Cities: Växjö. The high-pitched electronic noise is gradually taken over by the violins playing trills and glissandi. To make such transformation seamless high pitches are faded in to the noise texture, these are the same as the pitches the violins start playing. The violins begin very soft and are not audible at first. When they make their crescendi they blend with the pitches of the noise. The string texture produced by each individual player’s trills and glissandi blends in with the noise of the electronic sound. Gradually the electronic sound fades out. The seamless transformation is made up of several parameters: pitches, noise textures and dynamics.

At the end of the second song in Fält, Save my Soul, stylistically influenced from modern R&B music, the rhythmic beats and the piano solo gradually dissolve into a noise texture that sounds like waves. The actor enters, first whispering almost inaudible: ‘they say that the sea is worse’. The noise transforms into a rather harmonic, static chord that gives a calm feeling, as if the waves disappear and the sea becomes completely still. The actor continues, first very calmly and soft. But then she becomes more and more upset. The string chord that seemed to be totally static gradually becomes distorted through many very slow glissandos, creating a very dissonant chord. The singer enters with short aggressive and noisy vocal sound gestures and I join in with percussive sound object, making similar noisy sounds as the singer. We follow the intensity curve of the actor, the sounds become increasingly stronger with wilder gestures. Suddenly it all stops, the actor says quietly: ‘It is not worthy’. Then the next scene starts immediately, the music has a laidback but uneasy feel to it, a kind of electronica with a strange random rhythm pattern. The music here moves from a rhythmic section to a static sound to a part that is very gestural and finally ends in the next scene with a music that is rather static but with some rhythmic and moving elements.

Transformations are not only bound to the transformation of sound, it is also transformations between different musical styles and genres. In that case the rhythmic R&B music transforms to electroacoustic music. In the music in Arrival Cities: Växjö, for example, the transition between the first and second part goes from a section with a rather clear tonality rooted in classical music to a section of electronic music and then further to a section of instrumental music with more complex atonal harmonic structures in the style of 20th century European contemporary music. 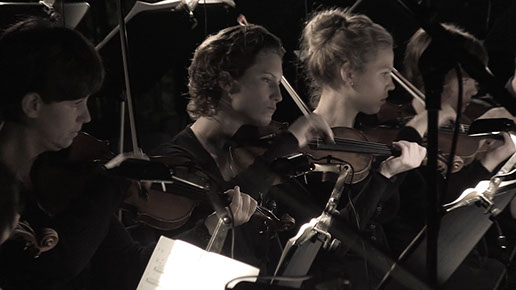