A field of musical styles and compositional techniques

The presentations of the works and the creative processes in previous chapter expose a wide range of musical styles, compositional techniques and working methods. They stretch from contemporary experimental art music to sections more influenced by the idioms of the Western classical music, and further from different forms of electronic music to sections with rock music. This was not something I planned or did consider at all initially; rather, like in general with my concert music, I aimed for creating music that was a coherent ‘one’, that is, coherent in style, musical material and compositional techniques. However, examining how I have worked another approach emerges, not only do I merge a wide range of musical styles but compositional techniques and approaches from different genres are transferred onto others and also onto other elements of a performance. In order to get an overview of this aspect I decided to examine the roles and functions the music have in the performances. I did that by grouping what I considered to be specific areas of the music’s dramaturgical functions. The groups I formed should not be understood as fixed categories, but as something rather open-ended. I will refer to these as modes of the dramaturgical functions of the music. They are based on my personal perspective as composer, and they are based on the works presented within this thesis. Analysis of further works of ours would possibly add more modes to the list, and may make others redundant. Below I have summarized the ten modes I found:

The overview suggests a particular approach to music and musical creation in the context: the roles and functions music have in relation to the other elements of a performance and how these relationships build the dramaturgical structures. Thus, the interplay with other elements is decisive for the compositional work of the music. Similar lists could be made for other elements, as different functions of video projections and light design, an aspect that will be touched upon in the next chapter. 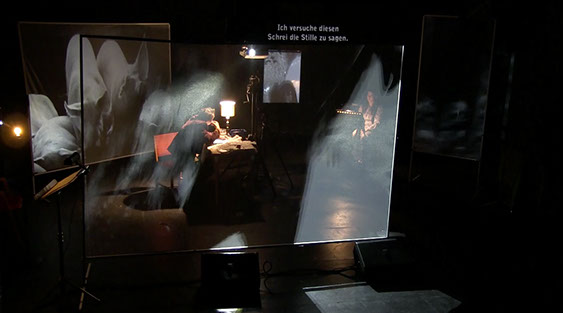