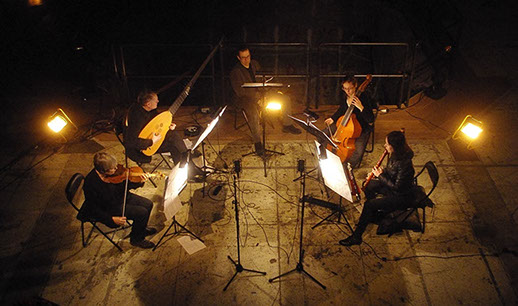 Moving my compositional practice into the field of contemporary theatre has transformed and expanded my artistic practice. However, this has not meant that I have stopped composing concert music. Most of the pieces of concert music I have composed over the years of the doctoral studies have been highly influenced by the experiences from the theatre work, or have been composed both as staged performances and as stand-alone concert pieces. The works I like to highlight here, that I myself find particularly interesting and successful as musical compositions are Intérieur/Extérieur  for Paetzold contrabass recorder, contrabass flute and electronics, Man’s Desire to be God, an art rock project, Champs d’étoiles, a suite for

counter tenor and period instruments and Arrival Cities: Hanoi, composed for a trio of Vietnamese instruments, chamber ensemble, and electronics. What unite these very different pieces is that the music in each case was created within its own ‘conceptual universe’: a specific weave of musical material and traditions, theatre methods, narratives, texts and relation to performance situation have shaped the context and conditions for the composition. In fact, for most of these works it is perhaps not correct to talk about pieces but rather suites, longer works that consist of many musical pieces in themselves.

As the very final part of my thesis, as an epilogue, I will briefly discuss the creative process of Champs d’étoiles and how the experiences from my work in theatre influenced the completion of the work. The creation period for this large-scale suite was very long. It begun one year before I started this doctoral studies and it went on a very extensive time, for over eight years. It is thus a work that has accompanied me in my studies over the years. The final work and its completion were highly influenced by my work with the theatre; the result would have been rather different without these experiences. The work was composed especially for the musicians in the ensemble Lipparella. Writing for the highly specialized musicians, their skills and personalities and the special dynamic of the ensemble was influential and most decisive for the composition. Although the creative process was characterized by a traditional way of writing and performing chamber music, there was also a strong collaborative aspect. The work would have been very different without our close connection and most likely, the work would not have been composed at all.

While the first separate movements I composed with text by Rainer Maria Rilke and others worked out really well, I could not find how to shape an overall form for the longer suite I intended to create. The process to complete the suite went through two staged versions, Okända rum (Unknown Spaces) and I skuggorna (In the Shadows). For each of these I composed further new movements. In the early stage of composing the work I tried to construct an overarching form through mathematical, geometrical and literary ideas. They did not work however, as I felt they had not any real concept or direction for the piece, the logic the ideas provided was only paper constructions. As stated, the first movements I composed worked out really well; they had their own meanings and directions through the connection and relation to the poems. It was the overarching form that was the problem.

When we created the first staged version, Okända rum, I used the music I had already composed as well as composing new parts. Together with the ensemble, Jörgen Dahlqvist and video artist Maria Norrman we created a performance with music performance, lights and video projections that consisted of both filmed material and projected poems. The performance was created especially for the old reactor hall in Stockholm, R1, a gigantic hall 25 meters below ground that was the first nuclear reactor in Sweden. The ideas for the performance evolved out from the themes and poems I had started out from in the first parts: the pilgrimage and texts by Rilke and Rimbaud.

The old tales of the pilgrims navigating their journeys with the help of the stars became a central idea and the hall was filled with small lights, a field of stars, Champs d’étoiles. The new parts I composed were not only composed in relation to the overall dramaturgical ideas we had but also in the relation to the special space. Most of the new compositions were composed with special placement of the musicians in the hall. In one part the five musicians were placed far apart, creating a spatialized music that travelled in the huge space. Two years later we did the other staged version, I skuggorna. For this I composed the last parts of the suite. In this performance I was actually myself on stage as a narrator performing a text written by Dahlqvist and me. This was partly autobiographical, partly from the poems used for the music and other sources, interconnected through the central concept of the suite: the pilgrimage. Again the idea with the stars as navigation light was present. A new idea was to use the sound of pulsating stars, recorded by an astronomer. In this performance I also used pre-recorded material: the sounds of the stars were transformed to the sound of someone walking, connecting the immense lifetime of the stars with our human lives. In the very last part I combined the ensemble with the stars and the steps, they came together in a walking, in a heavy relentless pulse. Here everything was united and connected, the pilgrimage, the wandering, the ensemble, the music and my own search. Here was the core of the work. And from here new journeys and new explorations begin.