The music in Fält consists largely of fixed electronic music. It is in itself diverse in style, sound and function. In some parts the music is a static soundscape that forms a sonic backdrop for certain scenes. In other parts these backdrops have a rhythmic, beat-oriented character, similar to contemporary electronica in sound and style. Yet other parts were built on a gestural approach leaning on classic electroacoustic music.

In the performance were also a number of rock-blues-jazz songs performed by the singer Zofia William Åsenlöf. In some of these songs I also joined in as a musician playing electric guitar, piano and sound objects. 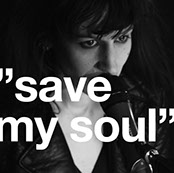 EXAMPLE 5.5.7.a Video: Lullaby, beginning of part I