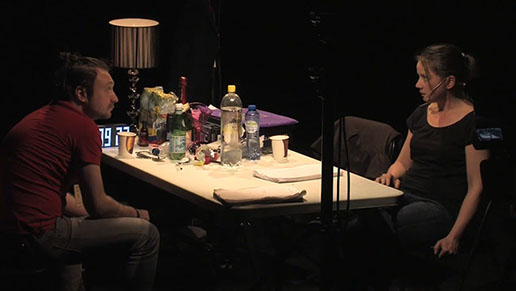 For Hamlet II: Exit Ghost, the director turns a theatre stage into a TV studio, a laboratory in which the actors take apart Shakespeare's words and characters. Dahlqvist is staging a play within a play. The confusion he maintains between the roles of Hamlet and Polonius and Ophelia and Gertrude exacerbates the madness, doubt and despair overwhelming them. The two actors battle with the play, masterfully navigating between its narrative line and a psychoanalytical interpretation of its mythical protagonists. These are made dramatically familiar thanks to the claustrophobic set and images filmed live. A meditation on identity, the weight of the past and death, Hamlet II: Exit Ghost is evocative of Scandinavian film and television series as much as the legendary productions of this classic among classics. Shakespeare meets Bergman meets The Killing! (Hillaert 2012)