In this part I present the two versions and compare sections that have the same text and partly the same or similar musical material. Such a presentation is of course best made with sounding examples. Short excerpts are set against each other in order to illustrate the differences. The objective here is to get an idea how the versions differ musically. How the different approaches to the text affected the results is discussed the next part.

It was only the first two parts of The Bells that were completed and performed in the first version, accordingly only these two parts can be compared.

As mentioned above, the first three lines of each stanza share the same structural and metrical form. This is reflected in both of my versions, and also between the two versions since this is one of a few musical materials that are found in both. How the modification of this material was made for the final version is discussed in detail in the part on compositional strategies and critical analytical interpretation as compositional method.

III. Two versions: A critical comparison of a rework #1

Hear the sledges with the bells

What a world of merriment their melody foretells!

I. Introduction and background

II. About the poem

III. Two versions: a critical comparison of a rework # 1

V. Two versions: a critical comparison of a rework # 2

Hear the sledges with the bells

What a world of merriment their melody foretells!

The melody is recognizable. The big difference is in the very expression and how the musical texture around the melody is shaped. In the version from 2000 it is almost only the melody that is heard, in the final version there is a richer sonic world of voices, instruments and electronics that respond and surround it. But the rhythmic expressions are strikingly different. In the first version it is static, restrained and drawling. This I feel characterize the whole first version. The music is almost minimalistic and the idea was to create structures as bells ringing in different tempi. In the final version is a dramaturgy. Already in the first three lines is another more vivid gestural phrasing. The ticking rhythms often appears, an idea that is kept from the first version, but here they build stronger movements forward, often through superimpositions of contrapuntal material that results largely in a more dramatic music.

The first three lines are followed by:

In the icy air of night!

While the stars that oversprinkle

All the heavens seem to twinkle 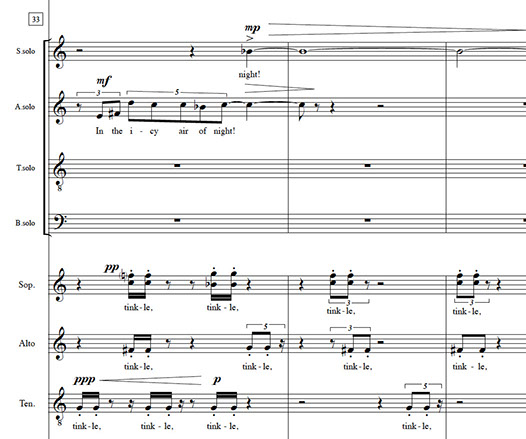 In the final version:

In the icy air of night!

While the stars that oversprinkle

All the heavens seem to twinkle

There is a similarity in how the word “Tinkle” is shaped in both versions, as short, staccato, “tinkling” rhythms in the vocal parts surrounded by small bell like sounds.  But in the first version they are based, almost stuck, in the slow drawling beats, while in the final version the “tinklings” have more free, differentiated rhythms that are overlapping into a texture which can remind of blinking stars in a winter night.