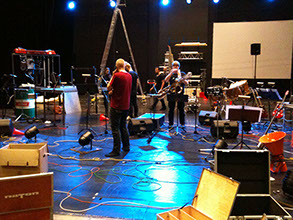 As the central theme was speed, Dahlqvist decided to take the famous car race Indy 500, a yearly race since 1911 at the Indianapolis Motor Speedway in USA, as a dramaturgical idea for the text. The admiration for speed and car race in Dahlqvist’s text is a metaphor used as a critical commentary to the ever-increasing speed of consumption of our time, as stated in the presentation of the work cited above: ‘we are already living in the future, with speed and consumption as linked matter in what has become a religion in which the global brands are the proponents of this global church’. The fifth paragraph of the manifest celebrated ‘the man at the wheel, who hurls the lance of his spirit across the earth’ (ibid.).  Dahlqvist did not really use the futuristic concept of a ‘liberated’ and dissolved language as such in his writing; instead, the point of departure was the very text of the futuristic manifest.

The second part of the title of the piece, Indy500: seklernas udde (Indy500: The promontory of the centuries) was taken from the eighth paragraph of the futurist manifest, which provided further material to the text, particularly the idea about the dead of Time and Space:

We stand on the last promontory of the centuries!… Why should we look back, when what we want is to break down the mysterious doors of the Impossible? Time and Space died yesterday. We already live in the absolute, because we have created eternal, omnipresent speed. (Marinetti et al. 1972)

When Dahlqvist presented a few pages of the first draft I found it had qualities that directly triggered musical ideas and form structures for me. A line in the middle of the draft caught my attention as the perfect start for the piece: ‘Det finns tre storheter. Hastighet, acceleration och massa. Och störst av dom är hastighet. Även hastigheten hastighet.’  I suggested to him that these sentences should be the opening of work.

By now we had decided on an ensemble with three actors and three musicians: guitar, saxophone and percussion. I started working on sound material for the piece. The futurism and the car race certainly invited to sonic explorations with the racing cars, accelerating motors, screaming tires, cheering people at the sport event and a big crash.

In the music I wanted to capture the technological aspect by using raw electronic sounds, sampled sounds of motors and machines, and an instrumental arsenal including distorted electric guitars and percussion instruments made out of car junk. The more brutal music parts were put in sharp contrast to quite and poetic sections, which were inspired by the poetic diversity in the text.