When I started composing Indy500: seklernas udde I was unsure how I would actually approach composing for actors and how to write the score. I did not want to use a traditional, precise rhythmical notation on how the actors should perform the words. Partly because they are not trained in reading music, but primarily because I find that such an approach of notating speech easily becomes stiff and limiting. Having said that, I should add that Olga Neuwirth in Todesraten used precise notation for both actor and instrument, which works very well as both the CD-recording of the piece shows and the performances by Teatr Weimar and Ensemble Ars Nova showed. However, I know that in the latter case reading and interpreting the notation was difficult for the actor and caused him a tremendous amount of work.

I was initially planning to write the score and work out the electronic parts as I would normally do, but in order to find a way to tackle the compositional issue on how I should approach the text I decided to invite the actors to the studio. I felt it could be a good start for all of us to get to know the text by recording it and listening to it. After the session I began to edit their readings. I started to add electronics and sampled sounds to the actors’ voices to test how it would work. Gradually I started composing the piece, not by writing a score but by making a demo version of the piece, with software simulations of the acoustic instruments. With the help of a DAW  I composed with the recorded text, cutting it, repeating sections and rearranging it, as I wanted. I could also alter the speed (without changing the pitch) of the recordings of the actors’ voices, which was an important feature for getting the right tempo of the readings. When we did the initial recordings we really had no idea of the tempo or the expressions for the text. What I unknowingly did through this process was a radio play – a radio play that we later performed live. However, at the time I just considered it a demo that I based my score on and that the performers could listen to preparing for the rehearsals.

Text in section E (Score part E around 8:30 - 11:00). Jörgen had already in his text suggested that some text parts should be overlapping, which is heard already in the first readings. In the final version I made much more extended use of superimpositions, rearranging parts of the text for musical resaons.

Discussions between director and actors of the section above, 24 June 2009

Since the temporal alignment of the parts in the computer was mostly carried out based on seconds, not in musical beats and bars, also the score is based on minutes and seconds. The actors’ lines were written as chunks of text that were consistent with the graphical representation of time in minutes and seconds. In this way the tempo of the text to be spoken was indicated approximately. Precise interaction within the ensemble and with the electronics was achieved by marking exactly which word or musical figure that would trigger actions for the other performers and the electronics. The final score became a mix of notational techniques: traditional musical notation for instruments in measured sections, proportional unmeasured notation indicating time with minutes and seconds for text and freer sections for the instruments, instructions for certain performance actions and for the electronics, and the indications for actions-reactions between performers. 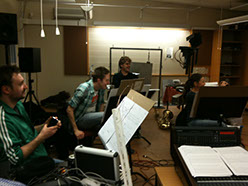 1 Ray Harroun is the prophet that described the vakue of speed.

1 And Kenny from Sweden his disciple.

1 and Ray showed man how.

1 Through speed we can leave the human within us…

This highly pragmatic way of writing the score turned out to be very successful. With the demo recording of the piece and a score that was working well for both actors and musicians, as well as for the interplay within the ensemble, already the very first rehearsal ran efficiently and sounded great. The initial process of recording the text and, subsequently, the way the score was written, would turn out to develop into important methods for many of our following works. 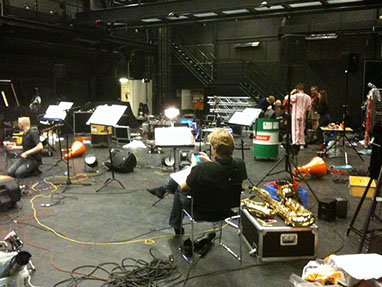 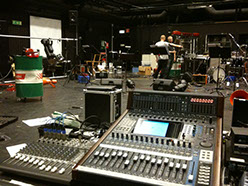