The text that Dahlqvist wrote for Indy500: seklernas udde has strong musical qualities. It made it easy for me to feel and imagine a larger musical form and it immediately gave me ideas for how certain sections could sound and be shaped musically. The way of writing was not something that we had really discussed on beforehand, but were rather a part of Dahlqvist’s style of writing. Three aspects of the text in Indy500: seklernas udde were particularly important for the musical composition of the work. They are:

As I outlined in the end of last chapter, many of my instrumental musical works have had strong programmatic references to non-musical material, but it has not been a matter of imitation but to create a music of becoming, to use Deleuze and Guattari’s term (Cobussen 2007). In musical works with texts this can naturally be a possible compositional approach, but of course do not have to be, as the music can take on a more independent role towards the text. A common approach in our works is that parts of the musical composition are developed out of ideas and sound material based on very concrete things in the texts. In Indy500: seklernas udde, I used the sounds of the speeding racing cars, motors and machines. There were on the one hand sampled sounds from recordings of such sources and, on the other, imitations of these sources as a ground for the musical material for the instrumental parts.

For the structure of the macroform the idea of the car race was central. The first sections of part one is the preparation for the race while the last section of part one the race itself, with a voice counting the 168 rounds.  I used the counting as a fundamental form structure to compose that section.

1 Now it begins. The race can finally start. Ladies and gentlemen. Welcome to the greatest sport event in the world. Don't let any other thoughts occupy your time. We own you in two hundred round. Lit the barbecue. Open the beers. Let the race begin. 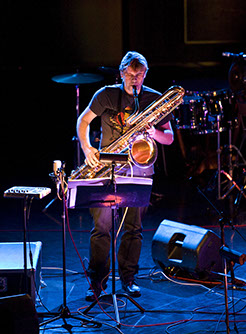 2 It must go faster.

There is the monotone counting of the rounds of the race in the middle section and there is the ‘tick, tack, tick, tack’ just before the race: the sound of a clock counting down to the start. There is also a section where different companies’ trademark names are enumerated, ‘Marlboro. Philip Morris. Mobil. Bosch. Camel. Argent. 7-eleven. Coca-Cola. Pepsico. Kodak. National. …’

One important feature of Indy500: seklernas udde was the particular divisions of the text in short chunks between the actors, which we often referred to as ”Ping-Pong” texture. Words and phrases are “jumping” between the performers, as calls and responses, but not as relational dialogues. Instead it is either one single text stream that is divided or it is being made up of several independent, superimposed streams. It was used in many sections and had a very musical quality, which became especially apparent directly when I first recorded the voices. It reminded me of a chamber ensemble group playing, as the kind of musical “conversation” that can be found for examples in many classical string quartets. In the compositional process I often composed the instrumental parts to these text sections as additional voices in the “conversations”.

This way of dividing the text are found already in the beginning of the work where Jörgen intertwined the fourth paragraph from the futuristic manifest with his own words:

Another example is in part A, at 4:10 in the score

1 There are three great entities: Speed, acceleration and mass.

And the greatest of them is speed. Also the speed speed.

2 We affirm that the world’s magnificence has been enriched by a new beauty...

2 the beauty of speed.

2 A racing car whose hood is adorned … with great pipes, like serpents of explosive breath.)

From a compositional perspective, these kinds of repetitions have two fundamental functions. Firstly, repetitions of words or phrases often give a sense of rhythm and thus, can be perceived as having a musical quality. In such text sections, words and phrases can easily be rearranged and extended if needed for compositional reasons. Secondly, repeating a word or a phrase over and over has a tendency of making us hear it differently, sometimes emptying the repeated words of their semantic content. Through this detachment the sonic aspects of the text are brought forward. 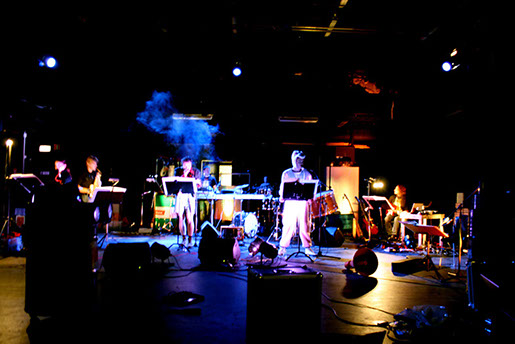