I. Introduction and background

II. About the poem

III. Two versions: a critical comparison of a rework # 1

V. Two versions: a critical comparison of a rework # 2

V. Two versions: A critical comparison of a

In a sort of Runic rhyme,

These two lines are repeated exactly the same in the last stanza. As quoted by Cummings previously here is a special connection between the first and last stanzas where “the bells become death's accomplice, marking the passing of time–each second, hour, day, year–with beautiful sounds that continue until life ends and the king of the ghouls tolls the death knell”. (Cummings) 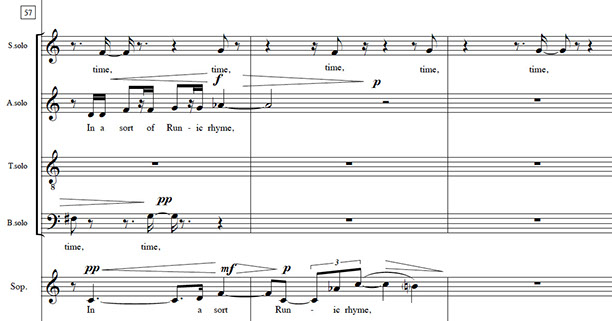 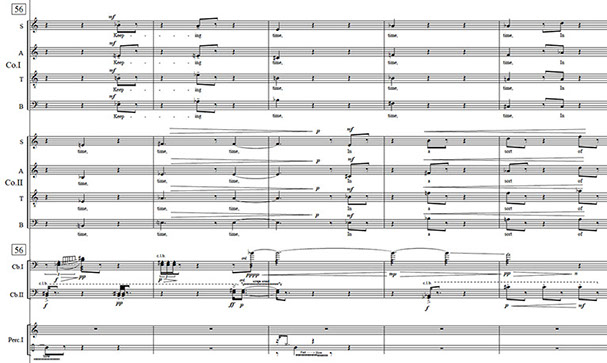 Also in this section the version from 2000 have the same slow beats as fundament, which make it sound rather similar to the part before. The same section in the final version sounds very different from previous parts in that version. I remember I tried to create a kind of strange clockwork for the “runic rhyme”, an idea that seems to be very much in line with the interpretation by Cummings. (Which I didn’t know of at the of the composition, in fact it says it was published a year after my composition)

Finally the last part of the first stanza. Each stanza of the poem ends with the repeating of the word bells. It is interesting to observe how Poe worked with this. The word Bell has like a real bell, maybe closest to a type of church bell, a similar morphological sound structure: first a rather strong and quick but dull attack with the “B”, then a decay of the attack into the “E” that is sustained and fades out over a longer time in the “LL”. In the transition from “E” to “LL” the higher partials of the sound are dampened faster, just as with a real bell.

The last parts that repeat the words Bells sound like this in the two versions:

From the jingling and the tinkling of the bells. 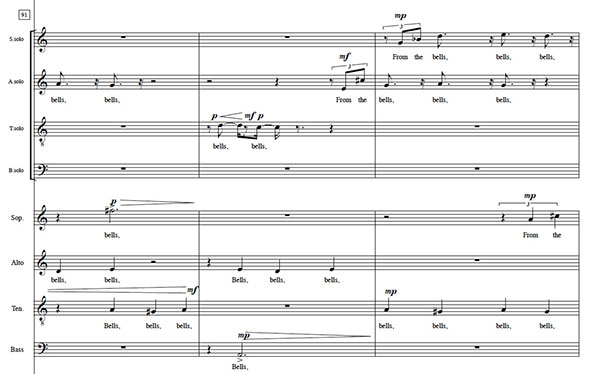 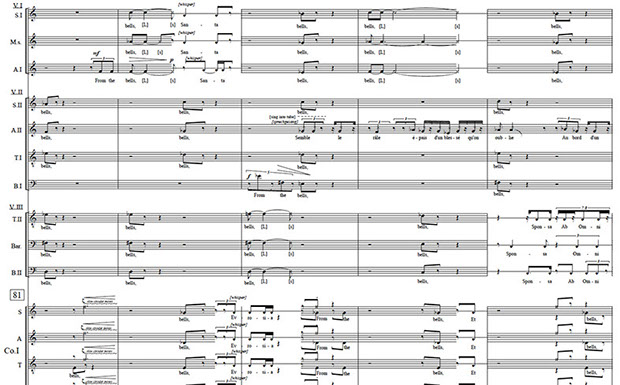 There are many differences in this section between the two versions:

- In the final version the sections is a much more organic continuation from the part before, it’s more of a consequence of what is happening before.

- The “ringing”, the repeating of the word Bells is sonically more varied in the final version, it moves between shorter, damped “bells” and sustained, where some tones from the chords are prolonged and shaped into new melodies. The “ringing” in the first version is more repetitive and much longer, which gives a minimalistic section

- In the final version other texts are overlapping the “ringing”, it is the Latin inscription on some old church bells and, more prominent, the amplified and filtered soprano that sings the poem La Cloche fêlée by Baudelaire. This poem appears throughout the first part in parallel with Poe.

Finally two examples from the second part of The Bells in the two versions, “Golden bells”, the first lines of the stanza, and the last with the repetitions of the words Bells.

What a world of happiness their harmony foretells!

Through the balmy air of night

How they ring out their delight!

To the swinging and the ringing

To the rhyming and the chiming of the bells!